The Habitat Williamson County 2020 build season will kick off with the House That Beer Built home in Taylor this January.  Future homeowner Shonta, a hair stylist and mom of 4, was accepted into the homeownership program in May and immediately started putting in her sweat equity by volunteering in the Round Rock ReStore and on another Habitat home builds.  “I’ve really enjoyed being out on the Habitat build sites and meeting all the wonderful volunteers and other future homeowners Flor and Kelsey! My youngest son recently stopped by the panel build event for our house and I could see the awe and excitement in his eyes knowing this will soon be our home!” 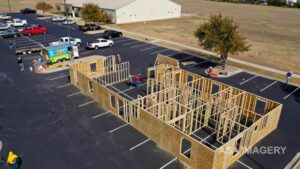 Construction on her home will begin on site in Taylor mid-January with the House That Beer Built Williamson County brewery teams.  Once on site, the home build project will take roughly 12 weeks to complete – with Shonta and her family moving in around early May.  “It will be a dream come true!  My kids will finally have the stability they deserve, something I never had when growing up. My mom was a single mom who worked very hard to keep us together but we had to move from home to home and sometimes we had to live in abandoned homes and shelters.  I don’t want that for my kids. I want security for them and their futures. I’ve worked so hard to show them that anything is possible and hard work and dedication can pay off.” Donate Today to help raise funds needed to build The House That Beer Built!

and Amazon will make a donation to Habitat for Humanity of Williamson County, Texas

Sign up with your email address to receive news and updates.

Our site uses third-party cookies and pixels to help us analyze site performance and serve personalized content and ads. You can opt out by adjusting browser settings. By clicking “Accept”, you consent to the use of ALL the cookies.
Do not sell my personal information
Cookie SettingsAccept
Manage consent

This website uses cookies to improve your experience while you navigate through the website. Out of these, the cookies that are categorized as necessary are stored on your browser as they are essential for the working of basic functionalities of the website. We also use third-party cookies that help us analyze and understand how you use this website. These cookies will be stored in your browser only with your consent. You also have the option to opt-out of these cookies. But opting out of some of these cookies may affect your browsing experience.
Necessary Always Enabled
Necessary cookies are absolutely essential for the website to function properly. These cookies ensure basic functionalities and security features of the website, anonymously.
Functional
Functional cookies help to perform certain functionalities like sharing the content of the website on social media platforms, collect feedbacks, and other third-party features.
Performance
Performance cookies are used to understand and analyze the key performance indexes of the website which helps in delivering a better user experience for the visitors.
Analytics
Analytical cookies are used to understand how visitors interact with the website. These cookies help provide information on metrics the number of visitors, bounce rate, traffic source, etc.
Advertisement
Advertisement cookies are used to provide visitors with relevant ads and marketing campaigns. These cookies track visitors across websites and collect information to provide customized ads.
Others
Other uncategorized cookies are those that are being analyzed and have not been classified into a category as yet.
SAVE & ACCEPT